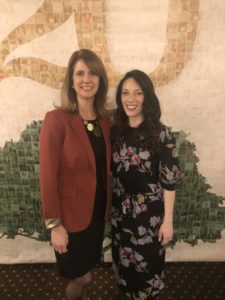 (From left to right) Nicole Feller Lee and Megan Martini have joined the staff of the Community Foundation of Orange and Sullivan.

MONTGOMERY, NY (February 28, 2020) – The Community Foundation of Orange and Sullivan (CFOS), the region’s preeminent nonprofit organization connecting people who care with causes that matter, has announced the hiring of two new team members. Nicole Feller Lee of Montgomery, N.Y. has joined the Foundation as its new Director of Development and Communications and Megan Martini of Maybrook, N.Y. has taken on the role of Administrative and Communications Associate.

In her position, Feller Lee serves as an ambassador for CFOS, meeting with new and prospective donors and organizations and making presentations to interested groups and organizations. She is responsible for overall marketing, development planning, external communications and media relations. Previously, Feller Lee was a vice president at Focus Media in Goshen, N.Y. where she was responsible for providing clients with strategic direction, managing media relations, and producing video and print content.

Feller Lee is also the Founder and Executive Director of The Corinne Feller Memorial Fund created in memory of her sister, Corinne Feller, who died of ovarian cancer in 1999. In this capacity, she successfully promotes events, raising hundreds of thousands of dollars for ovarian cancer awareness, research and quality of life initiatives. The fund was the first to be administered by CFOS.

“I am extremely excited to welcome Nicole to our team of talented professionals,” said CFOS President and CEO Elizabeth Rowley. “In addition to bringing a wealth of media and marketing experience, Nicole’s perspective as a fund representative uniquely prepares her to support other charitable individuals and organizations in reaching their goals.”

A former television journalist, Feller Lee brings extensive communications experience to CFOS. She previously worked as an anchor, reporter and producer at stations throughout the Hudson Valley, including News 12, Time Warner’s Cable 6 and RNN. While at Cable 6, Feller earned a Cable Ace Award for journalistic excellence anchoring the Cable 6 evening news. Additionally, Access Supports for Living awarded Feller with its Heart of Gold Community Service Award for her work as host of the Cable 6 telethon to benefit people with disabilities. Feller is also a former school library media specialist and is an expert researcher with extensive knowledge in the field of education. Feller holds a master’s degree in Library Media Science from Long Island University and a bachelor’s degree in English from St. Joseph’s University in Philadelphia.

In her position, Martini provides administrative support to the Foundation and oversees daily gift entry and acknowledgments and is the first point of contact for those visiting or calling the office. She also assists with marketing and communications activities including social media, electronic marketing and newsletters.

Megan Martini is an established professional with more than ten years in the field of Administrative Operations. She has worked both in and outside of the nonprofit sector throughout her career. Martini is a graduate of Mount Saint Mary College and holds a bachelor’s degree in English. Martini recently relocated to the Hudson Valley from Long Island.

“Megan brings years of customer service experience to the Foundation,” said Rowley. “She brings positive energy to her role and is ready and eager to support our donors in making a lasting difference in our community.”

About the Community Foundation of Orange and Sullivan

The Community Foundation of Orange and Sullivan (CFOS) is a nonprofit organization that connects people who care with causes that matter. Established in 1999, CFOS enables charitable organizations to become meaningful donors by providing trusted support and expertise for their contributions to make a difference in our community, now and forever. CFOS currently manages 322 funds representing more than $34 million in philanthropic capital. To date, CFOS has awarded more than $15million in grants and scholarships. To learn more, visit cfosny.org.

There are no upcoming events.