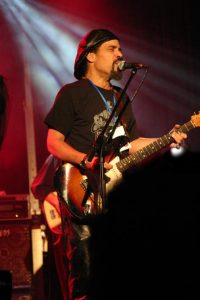 Internationally acclaimed blues musician Bill Perry — who was born in Goshen and played with Woodstock folk legend Richie Havens and The Band’s Garth Hudson and Levon Helm — will forever be remembered through grants and scholarships that will be awarded through a new fund established within the Community Foundation of Orange and Sullivan.

Before his death in July 2007, in Sugar Loaf, Perry toured the United States and Europe as a guitarist, singer and songwriter. He released seven albums between 1995 and 2006 as part of the Bill Perry Blues Band, and was sometimes referred to as “best bluesman that’s ever called the Hudson Valley his home.”

In his memory, the Bill Perry Memorial Fund for Education and Appreciation will forever award grants to nonprofit music-related organizations and scholarships for students pursuing music education.

“Priority will be given to students graduating from Chester Academy High School and Warwick Valley High School who have shown excellence in the field of music and will encourage the recipients’ ongoing pursuit of music,” said Rachel Bertoni, who established the fund and nine years ago founded the Bill Perry Day Blues Festival, held annually the last Sunday of July, in the Sculpture Garden in Sugar Loaf, NY.

Students interested in applying for the “Ed Vandercliff Scholarship for the Bill Perry Memorial Fund for Music Education and Appreciation” should see their guidance counselors. All grant and scholarship recipients must attend the Bill Perry Day Blues Festival.