About Oscar B. Greenleaf 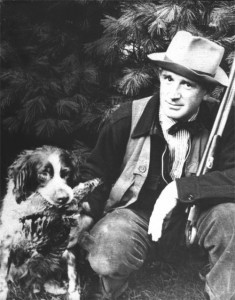 Oscar Benton Greenleaf was born on March 27, 1905 in the Village of Otisville, NY, in the home of his grandparents, Andrew and Etta Bailey Craig.

His father, Oscar Shaw Greenleaf, was a proprietor of the Greenleaf Hotel and Livery in Otisville, an important business to the community at the time. The family was among the early settlers in the Town of Mt. Hope. Shortly after Oscar’s birth, his father bought a very large Victorian home on State Street, where Oscar lived for most of his life.

After graduating from Otisville High School, a family friend arranged for Oscar to work as a bellboy at an exclusive Florida resort, Atlantis-by-the Sea. Later, Oscar and a friend signed on to work aboard the transatlantic passenger liner, the President Garfield, also as bellboys. They spent time in both England and France: quite an education for a young man from the country.

Oscar began his working career with a New York Telephone Company as a laborer, setting poles, at a time when the holes were hand-dug. Afterwards, he joined Rockland Light and Power Company, one of the predecessor companies of Orange and Rockland Utilities, Inc.

In these years, he sold electricity to the many farms in the region and ran line extensions into the rural areas. In the prime of his business career, he was active in the affairs of the community, serving on the board of the Port Jervis Hospital, and also on county and local development boards. He retired in 1970 as a Commercial Manager of the Port Jervis, NY/Milford, PA. Utility operation.

In 1984, Oscar sold his Otisville house and moved to a much smaller, ranch-style house in Port Jervis. In March 1993, during a severe blizzard, his home and contents were destroyed by fire in the middle of the night. He managed to escape with just a flashlight, bedroom slippers and a robe.

At age 87, he rebuilt his home, almost exactly, and remained there until his death at age 97.

Oscar was an intensely private person. He was quietly generous in his private and personal philanthropy but only to those issues and matters on which he felt strongly.

He was an ordinary person with extraordinary goals: to live life to its fullest, and give so that others could learn. His bequest has made it possible for children in Port Jervis to enjoy scholarships not only now, but in perpetuity. His goodwill will live on forever because of his gift to the Community Foundation.

The Greenleaf Legacy Society is now something you can be part of, too. Just like Oscar Greenleaf, anyone can leave a lasting gift to benefit the charity of their choice.

Live well. Give well. Become a member of the Greenleaf Legacy Society, and like Oscar Greenleaf, you can leave a lasting legacy too.

There are no upcoming events.